The LDSS Nauvoo was a huge generation ship built for a Mormon mission to another star, but repurposed as a ramming device during the Eros Incident.

The Nauvoo (later the Behemoth) is the most ambitious project Tycho Manufacturing has ever undertaken. We decided to do something extra technically complex to honor it. Don’t forget to read all the instructions if you try to make these!

We started with the idea of lime green Jell-O salad with fruit and marshmallows or whipped cream, a recipe so synonymous with Mormon culture that it featured on its own official pin for the 2002 Winter Olympics held in Utah, the LDS church’s home base. Then we got creative.

We amped up the lime flavor (and covered some of its artificialness) with lime juice, and made syrups of mandarin and pineapple (two classic Jell-O salad fruits when canned) to add brightness. We also used fresh fruit for the Nauvoo’s purpose as a self-sustaining ecosystem.

Instead of whipped cream or marshmallow, like in many Jell-O salads, we made a toasted coconut Italian meringue. In Italian meringue, hot syrup makes the mixture more stable while cooking the egg whites.

When Drummer’s team arrives to salvage the Nauvoo, the statue of the angel Moroni on its spire is broken off during maneuvers. We mirrored this for the Behemoth by removing the Nauvoo’s cherry and pineapple garnishes - and adding some of the drones’ fire for good measure.

Rum is our classic base spirit for OPA ships. We used an overproof gold rum in the Behemoth for its combination of smoothness and ferocity - like the expert but fractured Tycho crew. The Nauvoo, of course, contains no alcohol. 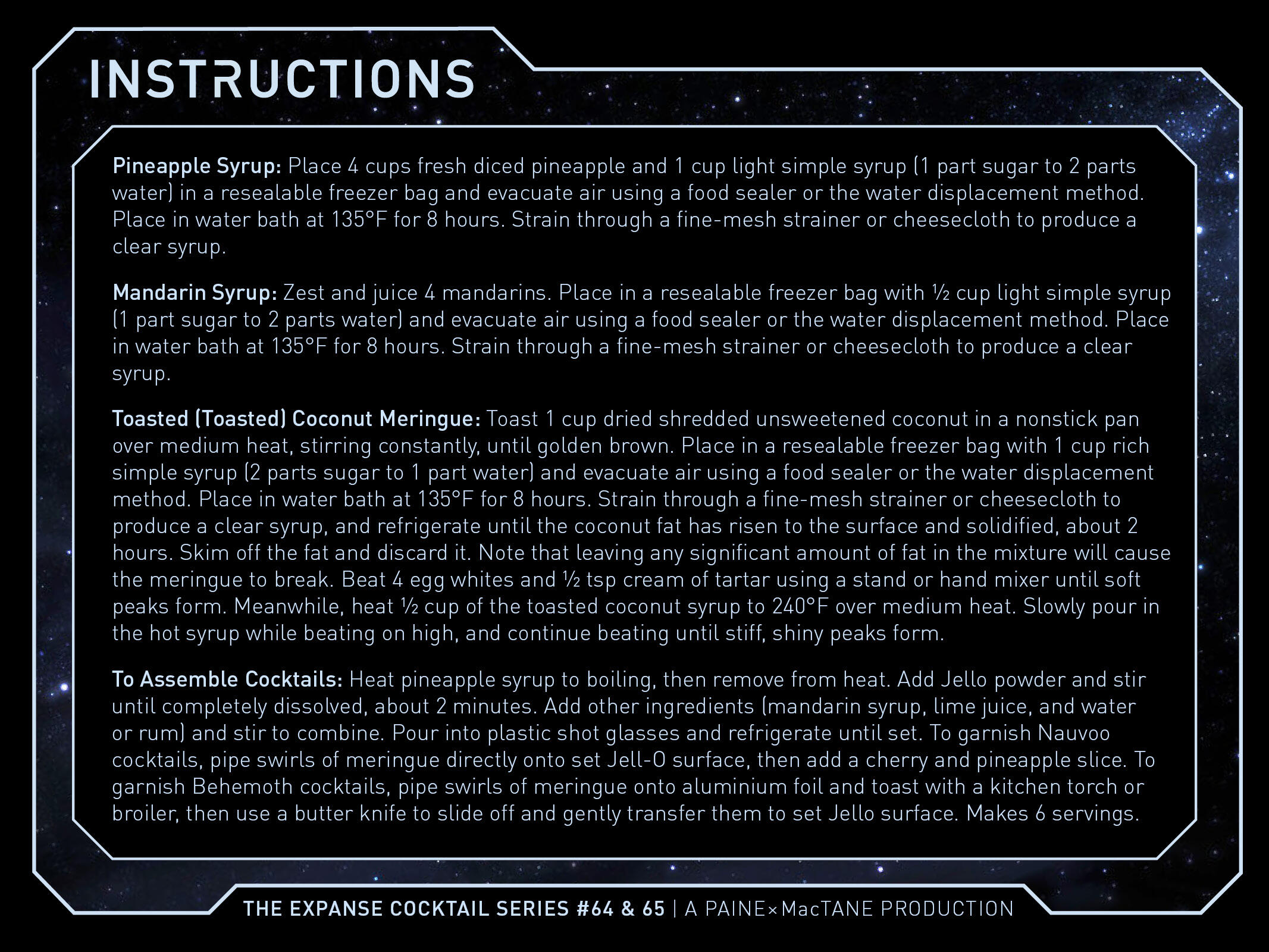 Mandarin Syrup: Zest and juice 4 mandarins. Place in a resealable freezer bag with ½ cup light simple syrup (1 part sugar to 2 parts water) and evacuate air using a food sealer or the water displacement method. Place in water bath at 135°F for 8 hours. Strain through a fine-mesh strainer or cheesecloth to produce a clear syrup.

Toasted (Toasted) Coconut Meringue: Toast 1 cup dried shredded unsweetened coconut in a nonstick pan over medium heat, stirring constantly, until golden brown. Place in a resealable freezer bag with 1 cup rich simple syrup (2 parts sugar to 1 part water) and evacuate air using a food sealer or the water displacement method. Place in water bath at 135°F for 8 hours. Strain through a fine-mesh strainer or cheesecloth to produce a clear syrup, and refrigerate until the coconut fat has risen to the surface and solidified, about 2 hours. Skim off the fat and discard it. Note that leaving any significant amount of fat in the mixture will cause the meringue to break. Beat 4 egg whites and ½ tsp cream of tartar using a stand or hand mixer until soft peaks form. Meanwhile, heat ½ cup of the toasted coconut syrup to 240°F over medium heat. Slowly pour in the hot syrup while beating on high, and continue beating until stiff, shiny peaks form.

To Assemble Cocktails: Heat pineapple syrup to boiling, then remove from heat. Add Jello powder and stir until completely dissolved, about 2 minutes. Add other ingredients (mandarin syrup, lime juice, and water or rum) and stir to combine. Pour into plastic shot glasses and refrigerate until set. To garnish Nauvoo cocktails, pipe swirls of meringue directly onto set Jell-O surface, then add a cherry and pineapple slice. To garnish Behemoth cocktails, pipe swirls of meringue onto aluminium foil and toast with a kitchen torch or broiler, then use a butter knife to slide off and gently transfer them to set Jello surface. Makes 6 servings.