We are Paine × MacTane: a transcontinental pair of sci-fi fans, language enthusiasts, cocktail creators, and perpetual learners and teachers. 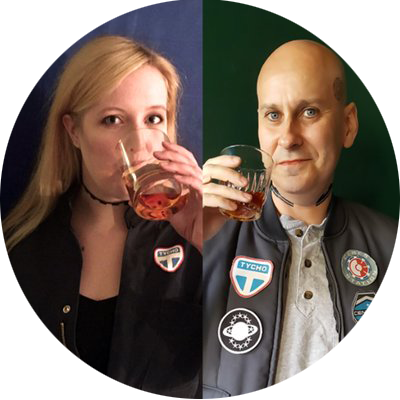 Hanne (“Iro”) Paine (@ItReachesOut) lives in Brooklyn, Kagan D. MacTane (@kmactane) in San Francisco. We were brought together by an online community for The Expanse, the award-winning show now on Amazon, based on the acclaimed novel series by James S.A. Corey. We quickly found many shared interests, and have been collaborating on projects ever since.

We have taught classes in Lang Belta, The Expanse’s “Belter Creole” language, at conventions from Montréal’s Congrès Boréal to Italy’s DeepCon to Baltimore’s ChessieCon, and at Worldcons in Helsinki and San José, California. We will be teaching again at Worldcon in Dublin in August.

We have also produced a Lang Belta course on Memrise, an online learning platform, designed to familiarize the average “Inner” with useful phrases to get around in the Belt.

Our Expanse Cocktails Project produced at least one original cocktail per week from September 2017 to November 2019. As of today, that’s 125 cocktails, based on characters, ships, and concepts from the show and books! You can browse the full collection on this website, where we’ve tagged drinks by faction, base spirit, difficulty, and more. We enjoy publishing them each week on Twitter, where we have fun and interesting discussions with our fellow fans and, often, the actors who portray the characters our drinks are based on.

We have created immersive “Belter Bar” experiences at Worldcon 76 in San José, where we won Best Overall Party, Best Party Decor, and Best Drinks, and at the Greater Philly Comic Con. We transformed each space into the Mung Belék or Black Moon, a broken-down Belter mining ship turned craft cocktail bar docked at Tycho Station. We sling drinks in character amid realistic ship walls and airlocks, lights, and display screens, with in-universe background music. Our happy guests have included dedicated Screaming Firehawks, new fans of The Expanse, and some of the show’s cast and crew.

We have other projects in the works, and this site is the central repository for all of them as they become public.